If I want to follow documented best practices, and keep my .NET transaction management simple, I’m going to use the TransactionScope class:

Let’s take a look at how that might work using the Stack Overflow sample database.

Voting is the Best

This user comes across a post they like, so they vote it up. There are two things that happen in our system when a post is upvoted:

With all that said, here’s the code. This is part of an ASP.NET Core RESTful API, using Entity Framework Core to access SQL Server 2019:

This works great, ship it!

Of course, user #1358 writes some great posts themselves - so we have a page that will show a user’s basic information and a list of all their posts.

When we view a user’s profile, we also increment a field called “Views” that shows how many times their profile has been viewed. We don’t want to drive that number up if the same person is refreshing the profile page over and over again, so there’s a “CheckForDuplicateView” method in there before we actually update the count.

You can assume that CheckForDuplicateView takes a few seconds because it’s doing some pretty important and complex stuff. And it’s definitely not doing await Task.Delay(3000);. Not that at all.

Hello I Have a Problem

Microsoft.Data.SqlClient.SqlException (0x80131904): Transaction (Process ID 54) was deadlocked on lock resources with another process and has been chosen as the deadlock victim. Rerun the transaction.

At this point, I’ll grab the deadlock graph to see what’s going on.

Killing Me Softly with Deadlocks

Here’s a screenshot of that deadlock graph in Sentry One Plan Explorer: 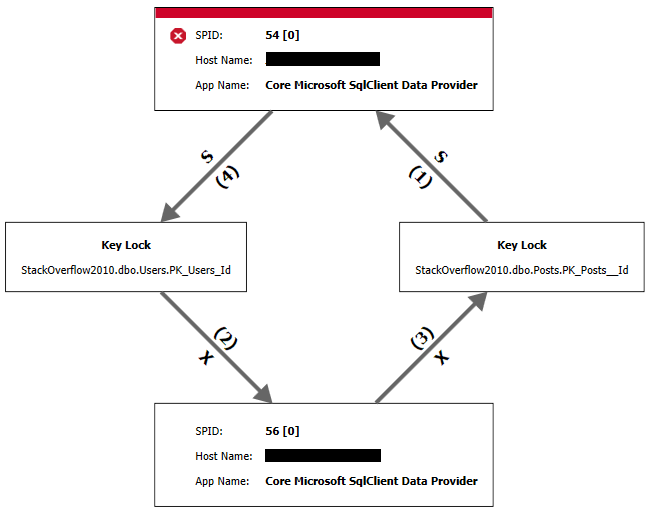 And a breakdown of the order of operations, which is represented by the numbers in between parentheses:

I’m really fond of sp_BlitzLock for quickly reviewing deadlocks, and this puts the red flag in this situation front and center:

I can see pretty quickly that these queries are using the most restrictive isolation level: SERIALIZABLE

But that’s weird, right? I didn’t change the isolation level, and the default for SQL Server is READ COMMITTED.

This problem has been around a long time. David Browne (Microsoft) wrote about it in checks watch 2010!

But surely this wouldn’t be the problem still, right? I’m using all the new hotness - ASP.NET Core 3.1, EF Core, etc. Good news, we can check since this stuff is open source now!

Since this odd default is still around, even after a rewrite of the .NET Framework that wasn’t shy about breaking backwards compatibility from time to time, we need to deal with it. Fortunately, David Browne’s solution still applies. I just need to add a little code when setting up my TransactionScope objects (or use a helper method, as in David’s blog post):

With READ COMMITTED, the shared locks on the posts table taken in step #1 above are released very quickly (rather than being held for the duration of the transaction), which lets the rest of the process proceed without blocking or deadlocks.

Why am I writing about this, since it seems to have been covered online ad-nauseum?

Well for one thing, I haven’t seen a lot of practical demos about this stuff. Hopefully the code samples above help folks wrap their heads around this problem.

But mostly it’s because I forget this all the time when working on new apps, and I’m hoping this will help me remember 🤣