I was looking at the output from sp_WhoIsActive (this little guy) the other day while a long SELECT query was running, and noticed that the “writes” column had a non-zero number in it. This seemed odd to me, since my query shouldn’t have been writing anything. But I had a hunch that it might be an auto stats update.

This seemed like a good opportunity to look into the code of Adam Machanic’s procedure, which I’ve never done before.

My first stop was attempting to repeat the problem. So first I went to my local copy of the Stack Overflow database, and dropped all the stats and nonclustered indexes on dbo.Users. Then I ran this query in order to get system-created statistics on the DownVotes column:

Fun fact: I recently learned that the “00000006” part of that name is because DownVotes is the sixth ordinal column in that table

Fun fact: I tend to play fast and loose with the word “fun”

In order to get the auto-stats update, I’m just going to update every row in the table. Sue me.

This will get the table modification counter high enough that SQL Server decides that stats need to be updated before the next SELECT.

So now we just run that same SELECT query and check sp_WhoIsActive:

Wow, 1 write! Still, seems out of place considering this was a SELECT query. Stats were indeed updated:

Notice that the default sampling rate here (and for the original) was about 19% of the table.

So where does that value for “writes” come from? For that, we can check the code.

As you can imagine, this is a very complex stored procedure. It’s rather well-organized considering how massive it is, so I was quickly able to track down where [writes] is selected:

Scrolling a bit further, we can see what r and s correspond to:

So Adam is pulling writes straight out of two DMVs: sys.dm_exec_sessions and sys.dm_exec_requests

The Docs aren’t extremely verbose on the [writes] column in either place.

But it’s really not too tough to confirm that those DMVs will show “writes” to the LOB statistics objects.

I decided to naively spam the DMVs while updating stats manually in order to capture what was happening. I ran this in one SSMS window:

And then ran this in another window:

NOTE: I got “54” by running the query SELECT @@SPID; in the query window where I ran the update stats command

And below is the progression as update stats ran, and then our session’s row in sys.dm_exec_sessions was updated with one additional write: 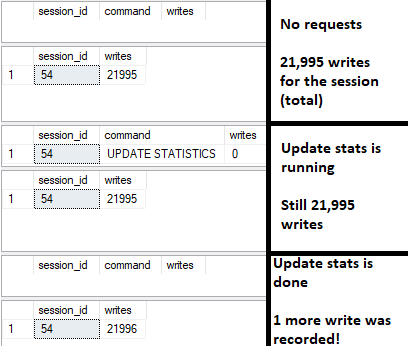 This is just one example of how writes can show up during your read queries. Although this only showed 1 page written, it won’t necessarily be that exactly. I ran the same demo as above, but updated with FULLSCAN (rather than sampling 19%) and saw 6 writes in the session.

Have you seen high (non-tempdb) write counts for read queries in sp_WhoIsActive (or other monitoring queries)? Let me know what they were in the comments!

Thanks for stopping by.