As I ponder what to write on this blog, it occurs to me that the topic of how to set up a blog with Jekyll on Windows is fresh on my mind. So, at the risk of being a bit “meta,” here we go!

First of all, what is Jekyll?

Jekyll is a simple, blog-aware, static site generator. It takes a template directory containing raw text files in various formats, runs it through a converter (like Markdown) and our Liquid renderer, and spits out a complete, ready-to-publish static website suitable for serving with your favorite web server.

There you have it. I think I first considered playing around with Jekyll while reading Nick Craver’s blog about optimizing his own blog. One thing I have really enjoyed about working with this technology is the simple deployment (more on that later).

So to start, I need to install Jekyll. You’ll notice right away that one of the listed requirements is “GNU/Linux, Unix, or macOS.” Fortunately, with the advent of Windows 10 Anniversary Update, I have access to the Windows Subsystem for Linux (aka Bash on Windows). The Jekyll folks have provided an installation guide (Installation via Bash on Windows 10) that worked perfectly for me, so I will not re-hash it here.

Go ahead and install it. I’ll wait.

Now that I have Jekyll installed, I’ll open a bash prompt and navigate to where I want to create my Jekyll project:

Then I’ll create the new project with the command jekyll new josh-the-coder.
The “josh-the-coder” part just tells Jekyll to create the project in a new directory with that name, rather than the current directory.

Note: you may need to run this command as root (“sudo jekyll new…”). I did the first time because my non-root account couldn’t actually install the dependencies.

To make sure that things are still going okay, I can have Jekyll host the new site locally and view it in the browser using the jekyll serve command. I have to cd into the new directory first, though: 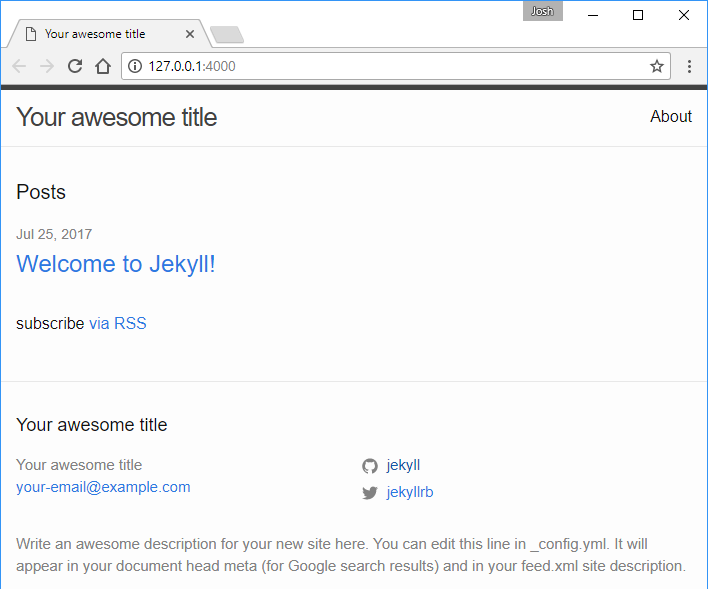 You’ll notice there is a lot of filler text here. Most of this is set in the “_config.yml” file in the root of the project. These settings are either self-explanatory, or well-commented.

I’ll go in now and remove the GitHub and Twitter links, the email address, then update the site title and description. The relevant portion of the file ends up like this:

To see these changes, I need to stop the serve action (ctrl-c) and run it again, because Jekyll doesn’t reload this configuration file automatically. This site is starting to look pretty good! 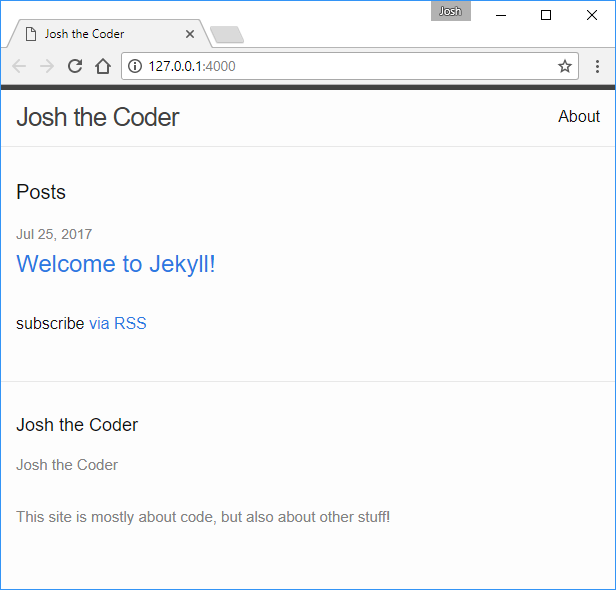 The last thing thing I need to figure out is how the “posts” actually work here. Inside the “_posts” folder of the project directory, there is a file named “2017-07-25-welcome-to-jekyll.markdown” that serves as an example. Incidentally, this file contains a great explanation about how posts are managed:

To add new posts, simply add a file in the _posts directory that follows the convention YYYY-MM-DD-name-of-post.ext and includes the necessary front matter. Take a look at the source for this post to get an idea about how it works.

Seems pretty straightforward. So I throw this masterpiece together:

And it automatically shows up on my home page! Well, it didn’t the first time. Turns out Jekyll is smart enough to hide future-dated posts - in fact, it skips rendering them entirely! 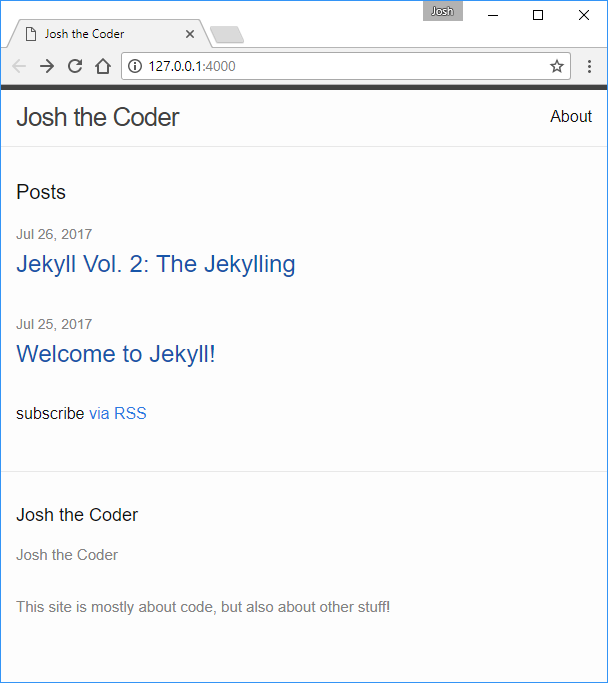 Well that’s pretty much it for the basics.

One of the huge upsides for Jekyll is the simple deployment. Whenever I build the project (with jekyll build or jekyll serve), a subfolder named “_site” is created inmy project directory. That folder contains everything needed to run the site - all markdown is converted to HTML, all resources from the theme are copied to the appropriate places, etc. So in the end, all I have to do is copy that folder to my web server.

I highly recommend perusing the rest of the docs to find out the many other customization and extension points. I know my next stop was how to override theme defaults.

Have you used Jekyll? Have another static site generator you like? Think I’m doing all of this wrong? Let me know in the comments!